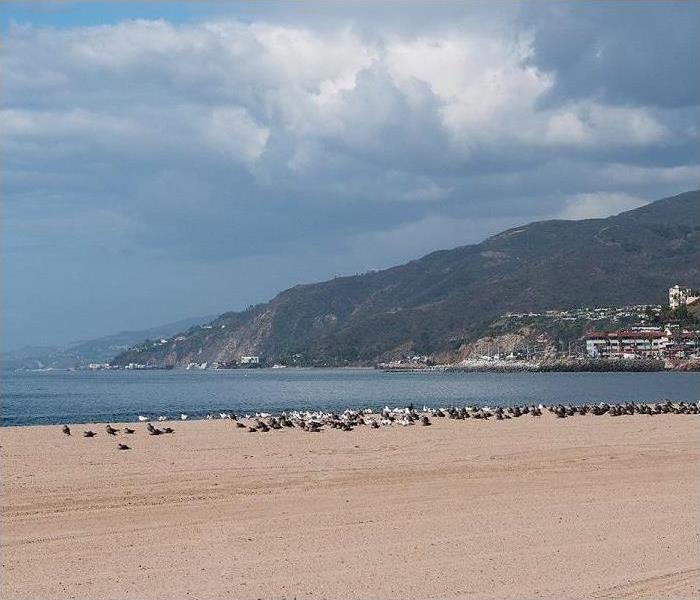 Santa Monica has so much to offer. SERVPRO is always on call to restore your fire damage so you can enjoy all the area’s beauty.

There are two schools of thought for how Santa Monica got its name. The first tells the tale of how the town got named for the feast day of Saint Monica, patron saint of wives, alcoholics, and abuse victims. The second way this town may have gotten its name is because the dripping spring reminded early settlers of Saint Monica's tears. No matter how it got its name, in 1886, the citizens voted to incorporate the town and founded the first town hall in a small, brick building that later served as a saloon and in the present is a portion of the Santa Monica Hostel.

The railroad is why Santa Monica grew, and the line received regular use until 1933. The residents did not want the noise and commotion that came with being a major stop along the railroad line. Instead, they leaned towards investing in the entertainment industry, specifically amusement piers. This type of venue became wildly popular in the first half of the 20th century. Competing parks repeatedly tried to one-up each other by creating ever faster and larger roller coasters. At one time, the city had five amusement piers in operation; in the present, only the Santa Monica Pier, constructed in 1909, remains on the north bay.

One of the most famous amusement piers was the Pacific Ocean Park, which opened in 1958. It was more popular than Disneyland for a while, and then attendance began to fall off. By 1967, the park ceased to function and got foreclosed due to unpaid taxes, and it sat empty until removed as a hazardous property and nuisance in 1974. Besides local businesses, the economy also depends upon tourist revenue.

An Unlikely Contributor to Santa Monica

Hollywood noticed the amenities the city of Santa Monica offered, and one of the first people to buy a large parcel of land was comedian Will Rogers. He built a ranch in the Santa Monica Canyon in 1922 and created a polo friend where he played with friends such as Spencer Tracy, Robert Montgomery, and Walt Disney. After an untimely death in an Alaskan plane crash, the residents found that Rogers deeded his ranch land to the public. In the present, the area got split into three main places known as:

While many celebrities reside in nearby Los Angeles, some famous names call Santa Monica home. Four well-known names that live in the city are:

The year-round climate in Santa Monica is warm and classified as a moderate Mediterranean climate. The temperature tends to range from 70s F throughout the year, with summertime temperatures occasionally hitting in the 80s.

A phrase locals use to describe the month of June is "June Gloom." While the city sees an average of 310 sunny days per year, the month of June often brings morning fog and overcast skies that do not burn off until around noon.

As far as bad weather, the city is in one of the lowest risk groups for Pacific hurricanes, only experiencing three since storms began getting recorded in 1930. Consequently, the city has a high risk of earthquakes. Over 3700 earthquakes have occurred since 1931, according to the USGS (United States Geological Survey) database. According to the USGS research, the area has a 94.99% chance of a significant earthquake within the next fifty years. The last major earthquake recorded in Santa Monica had a center just outside the city and measured a magnitude of 6.7 in 1994.

How Can Fire Restoration Techniques Help Against Smoke Damage and Odor

Different types of smoke damage need fire restoration services in Santa Monica homes post-fire. The two main types are wet and dry smoke. Depending on the materials burned during the fire, these residues are produced. SERVPRO technicians perform tests on the smoke and the surface to determine the best cleaning method to lift away the smoke without marring the surface. Incorrect or some DIY techniques for fire cleanup can lead to issues such as:

SERVPRO technicians use their advanced cleaning agents and methods to clean surfaces. Hardwood furniture and countertops covered in soot may look ruined, but on a case, by case basis, they have restoration potential.

Odor control is a large part of the fire damage cleanup that needs to happen. If there are elements such as smoke webs and charred building materials, strong odors remain in the home. The need for controlled demolition, where the techs carefully remove only the materials too damaged for restoration, helps lower the pungent smells. Follow up treatments with different odor control applications work to eradicate any remaining smoke odors in the house.

This SERVPRO location holds contractor license #837225. Once any needed controlled demo actions get taken, the techs can also perform the repairs to return the home to its normal condition and remove all signs of damage from the flames and smoke.

SERVPRO of Santa Monica / Venice Beach at (310) 395-9050 for a fast response to fire restoration needs in local Santa Monica homes.