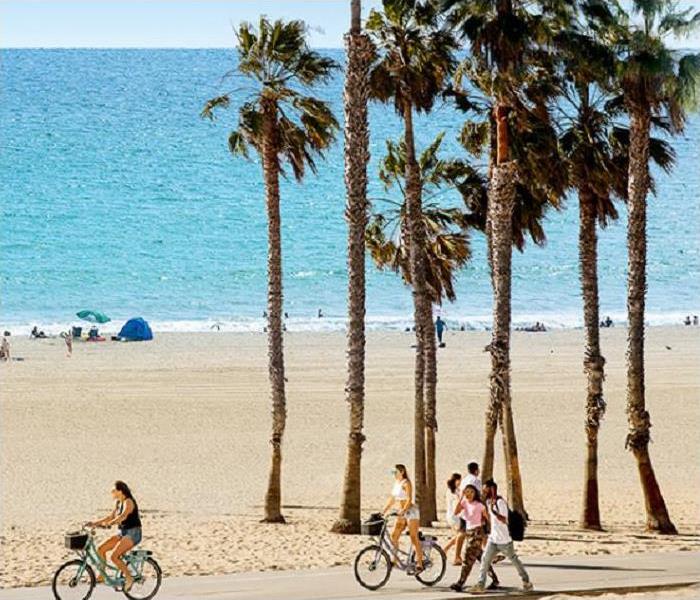 Santa Monica has a rich cultural history from its inception in 1542 when Juan Rodriquez Cabrillo dropped his anchor in the Santa Monica Bay. Later in 1769, Father Juan Crespi named Saint Monica, patron saint of abuse victims, wives, alcoholics, and widows. In the present, over 90,000 residents call the city home. Locals refer to the area as "SaMo."

Around the 1920s, Hollywood stars started buying up Santa Monica property for themselves, and the population grew to over 37,000. Well-known names frequently sighted in the city were:

In the 1950s, Muscle Beach ignited the 90-lb weakling into becoming built like fitness icon Charles Atlas. Works Progress Administration (WPA) installed exercise equipment on the beach in the late 1930s, and gymnastics activities were primarily performed on the beach initially; since the 1950s, the area has been the hub of fitness and bodybuilding.

The Weather in Santa Monica is Beautiful

The overall climate in Santa Monica is excellent weather for outdoor activities year-round. This area of California averages just 14-inches of rain per year, and the US average is around 38-inches of rain yearly. It does not snow beyond flurries that happen rarely. Residents can count on around 281 sunny days per year, far surpassing the average for the rest of the United States having 205 days. The summer heat tops out at about 74 degrees Fahrenheit in July, and the coldest it gets on average is about 49 degrees in January.

Best Things to Do in Santa Monica

Tourists and locals both have many activities and venues to visit besides the beautiful Santa Monica Beach. One of the most famous is the Santa Monica Pier. The pier is home to Pacific Park, a small-scale amusement park with a roller coaster, Ferris wheel, and other rides. The Santa Monica Pier Aquarium has a convenient location inside the area, and in the summer, live music is a frequent event.

Third Street Promenade is alive with activity as a pedestrian shopping area. There is an abundance of street performers and the best viewing times are in the evenings and weekends. The venue was once home to many unique shops and food kiosks; in the present, many of these local businesses lost out to large chain stores and franchise restaurants, but there are numerous shopping and dining opportunities.

The Annenberg Community Beach House welcomes the public with a community center, public swimming pool, and a gallery located centrally at Santa Monica State Beach. This house was originally the site of a 100-room mansion that publishing mogul William Randolph Hearst built for Marion Davies in the 1920s. The property became a hotel and club before deteriorating, and the structure, except the beach house, was torn down in 1956. The Northridge Earthquake in 1994 caused tremendous damage to the club, and the city lacked the funding to repair it. Wallis Annenberg of the Annenberg Foundation provided the funding to restore the structure and reopened in 2009 as the Annenberg Community Beach House with the pool and Marion Davies Guesthouse restored fully.

For anyone looking for something off the beaten path to check out, The Camera Obscura remains a quirky destination in Santa Monica, drawing in photography buffs and science enthusiasts. The Camera Obscura is a large, dark room that essentially works as a camera's interior, allowing only a small amount of controlled light to enter. The beam of light projects an image as seen through a periscope onto a plate within the darkroom and creates a photo.

Many influential businesses call Santa Monica their home base. A few notable names include Beachbody, the burger franchise Fatburger, streaming service Hulu, Illumination Entertainment, and Lionsgate Films. There are also many game developers with headquarters in the SaMo area, such as Activision, Naughty Dog, and Riot Games. The number of tech companies using the site as a central location has led to the nickname of "Silicon Beach" getting used more often.

While Santa Monica does not get threatened directly by wildfires in the region regularly, wind-driven blazes have occasionally impacted the city, with red flag warnings telling residents to prepare being a familiar sight for most locals. Residents of the area often receive the secondary effects of the fires such as:

What Happens During Fire Damage Restoration in Santa Monica Homes?

Whether wildfires caused it, an interior electrical issue, or human error, post-fire, the need for fire damage restoration to begin quickly in Santa Monica homes is enormous. SERVPRO technicians have numerous techniques to limit spreading soot and odor to other areas of the house.

After determining the scale of the damage to the home from the fire, the technicians set up any areas that may be dangerous due to structural damage and add signage and security tape to keep unauthorized parties out for their safety.

Containment is another common tactic using either heavy gauge plastic or a negative air chamber.

SERVPRO technicians use multiple methods to improve air quality within the structure by using:

Once the cleanup gets completed, the technicians prep the structure for the needed repairs, such as replacing hardwood or tile flooring, sealing and repainting walls, or installing new carpet. This SERVPRO holds a general contractor license #CSLB: 837225 and can make the seamless transition from remediation to reconstruction as the client chooses.

SERVPRO of Santa Monica / Venice Beach at (310) 395-9050 for any size fire damage restoration in local Santa Monica properties. The certified technicians bring the knowledge and experience to handle every phase of the mitigation and make the home disaster "Like it never even happened."